From River to Ricochet

The Big EZ armored with Ricochet is the innovative technology that is the result of years of testing and improving solutions to the problem of impact dings and breaks from colliding with rocks on the river. In an aqueous environment like a river that is merciless on both the body and equipment, having a lightweight resilient board is crucial, but when I set out to find a solution there wasn’t anything on the market that came close to what I needed.

My first time on the river I experienced firsthand the merciless power of the rocks and white water. After those first few runs I walked away with a broken thumb and the bottom of my board looking more like a golfball than an SUP. Sitting by the campfire later that night I began thinking about how to go about making my boards tough and light enough to race competitively on whitewater.

But, I kept at it. Every time I went down the river I would just have to repair the board. Which isn’t too bad if you know how to do it, but for the everyday paddler it is definitely not ideal. After our boards seemed to be constructed of more patched up holes then of the original glass; I knew there had to be something better out there that would be more permanent. 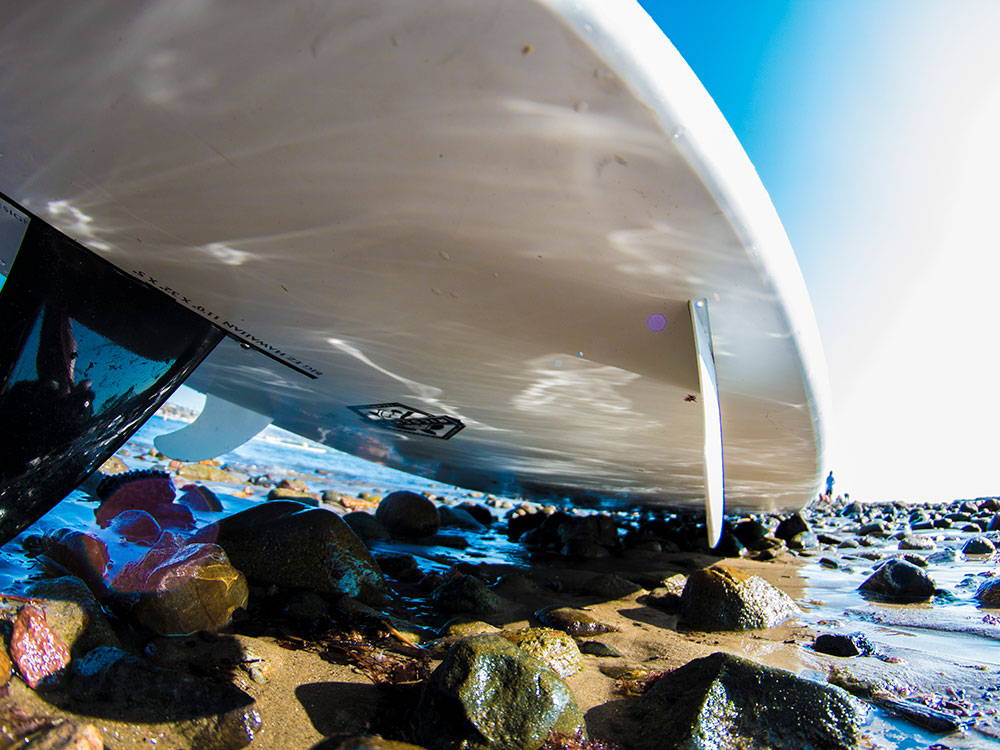 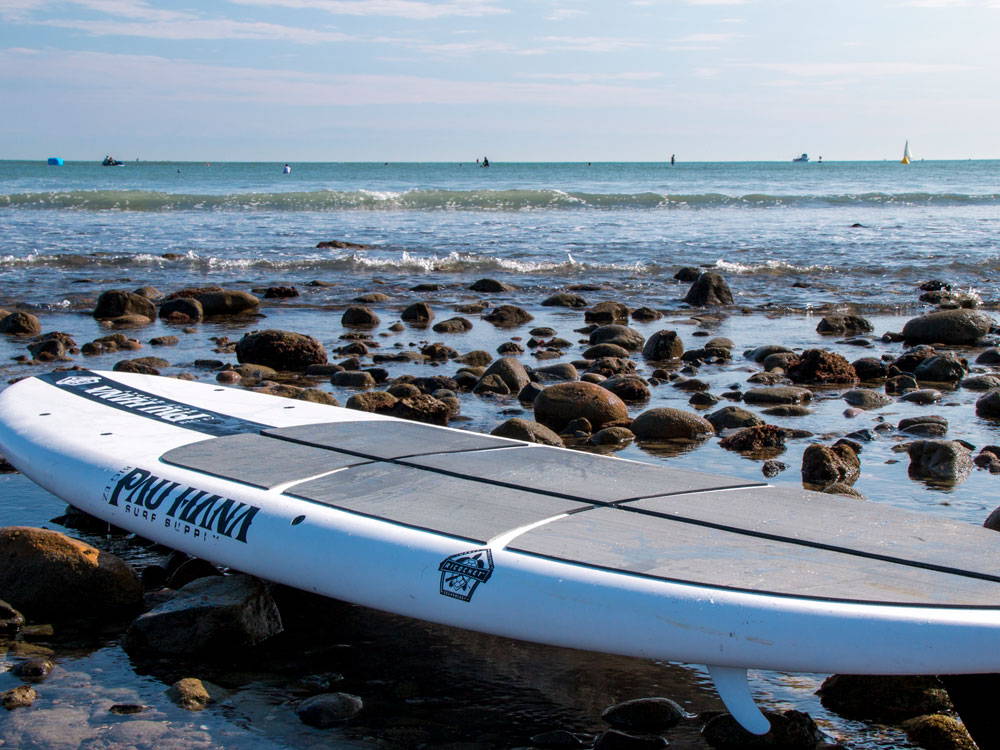 Now, I’m not saying that this problem started with people going down rivers on their SUPs.

The origins of the need to create a board that can withstand heavy force goes way back to the early years of surfing. Back in those early surf years, when they had fins glassed in the boards when you broke a fin you couldn’t just go out and replace it, you’d have to reglass the fin back in.

Just as the need for an interchangeable fin box spawned one (thanks Bill Bahne), the need for a stronger board that can easily withstand slamming into rocks in the river spawned out Ricochet. The river continued to be the testing ground while developing Ricochet.

Ricochet wasn’t something that happened overnight or even the course of a few weeks, it is the result of years of trial and error. The first step in any development process starts not with experimenting (don’t worry that will come later), but with research. First, we looked into what else was in our own industry to see what was out there already to see if we could build upon that.

First, we tried soft top foam boards, which have been used for quite awhile in both the surfboard and the paddle board industry. Yeah, they could absorb impacts okay at best, but they were springy and disintegrated in almost no time at all.

Then, we tried inflatable SUPs.

But, their lack of rigidity and bounce made it difficult to maneuver down the river or in features. Plus, they couldn’t be formed into any complex shapes at all like hard board epoxies. It became obvious pretty fast that there wasn’t any type of technology or construction in our own industry that we could use to traverse down the river. This got me thinking that we needed to do more research into what materials other industries were using to solve similar issues. After all, just think of carbon fiber being used in boards. That was originally developed in the aerospace industry and is still used on most airplanes today due to its lightweight, high strength qualities. 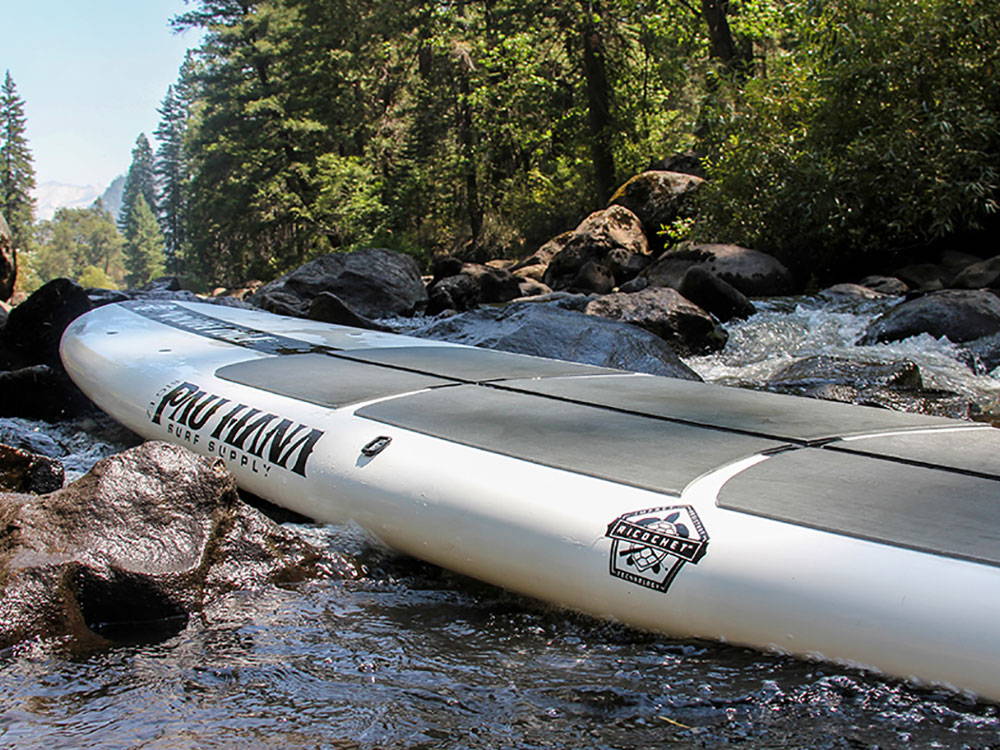 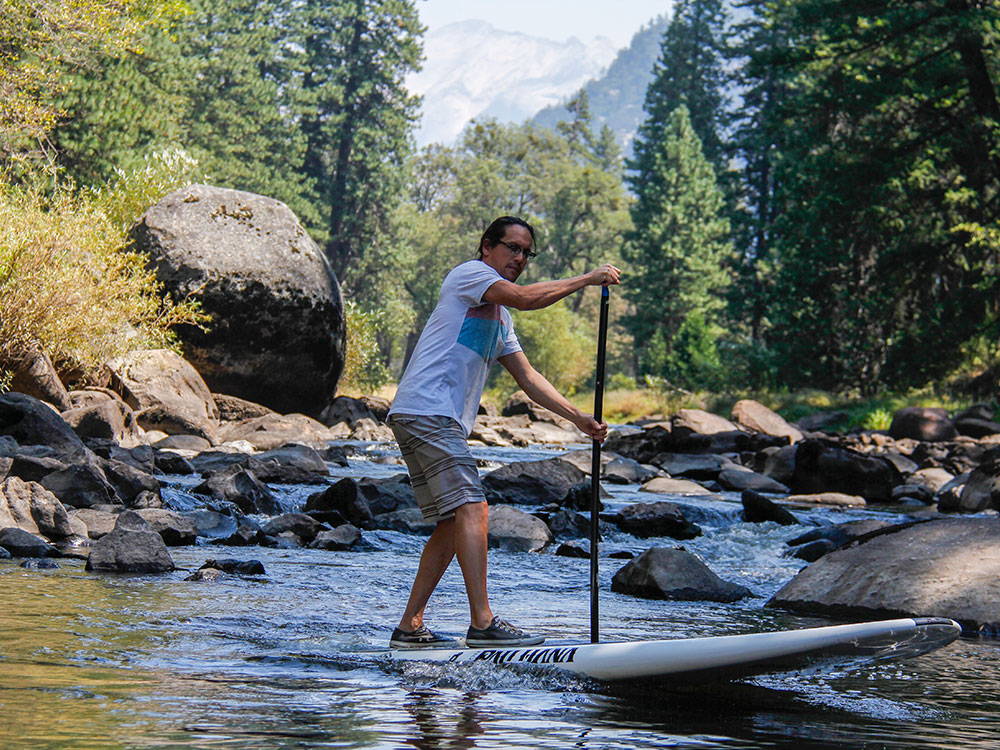 At first we didn’t look far.

We looked at the construction of kayaks and so we started playing with rotomolded SUPs on the river. In case you don’t know, rotomolding, or rotational molding, is a thermoplastic process where plastic powder or resin is spun while being heated in a hollow mold to create a seamless and hollow object. The rotomolds works, but the weights that the stand up paddle boards were coming in at weren’t. Their weight would exceed over fifty pounds and were too sluggish and heavy to paddle to get through some parts of the river.

We then began going back to regular epoxy boards again and tried applying different materials to the outside that we thought might at least cushion hits from rocks, but would minimize the weight added to the boards. That’s where we found truck bed liner. Which, is what people put in their truck beds to keep their bed safe from getting scratched or dented from heavy and often sharp objects. This worked fairly well, but to get enough of it on to be effective, the truck bed liner ended up still being too heavy. Not to mention, after a couple of times on the river we noticed that the boards kept getting heavier and heavier. Great, so they also absorbed the water. Definitely not a permanent solution and no one really wants a board that’s rougher then black top. 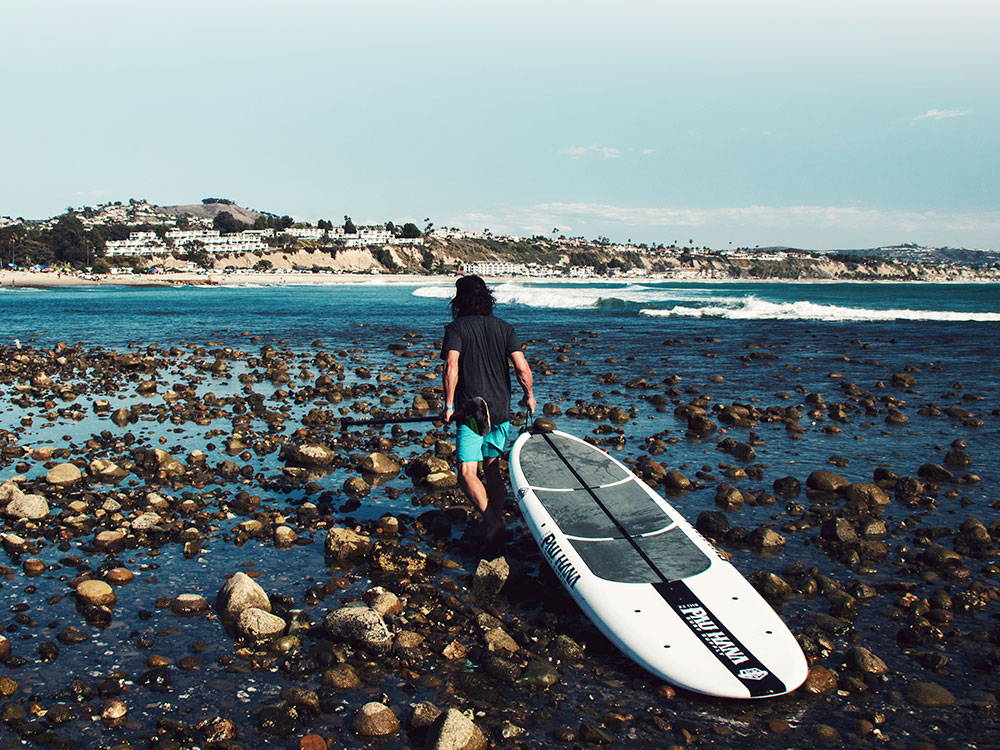 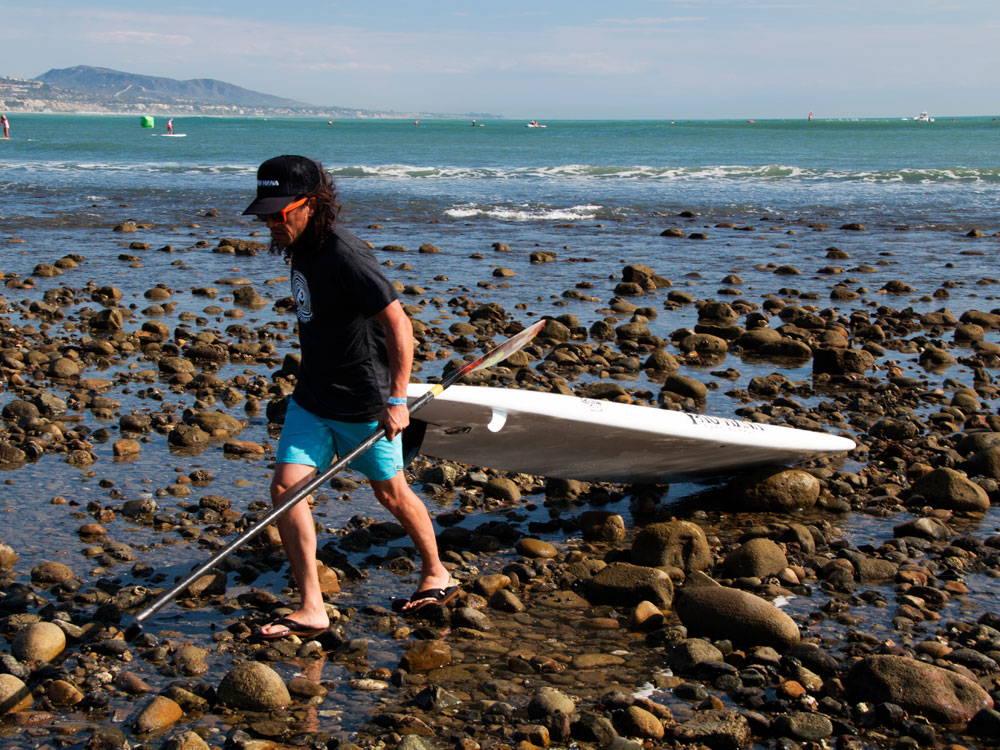 Eventually, we decided to play with the fiberglass itself and embedding different materials into it. This seemed like a good idea since it kept the stiffness, complex shapes, and the weight low on the board. Eventually, we embedded Ricochet into the fiberglass and we knew we had something special when we started throwing it out two story buildings, three story buildings, running it over with motorcycles, and then running it over with our cars.

Initially, I had no idea that Ricochet would become what it is now.

I started with nothing more than the need to make a board tougher than anything I had ever come across before, and while some things met my benchmark for toughness they did not meet the standards I set for rigidity, malleability, or weight. I had to create something new and original that would change the standard for toughness in an SUP. 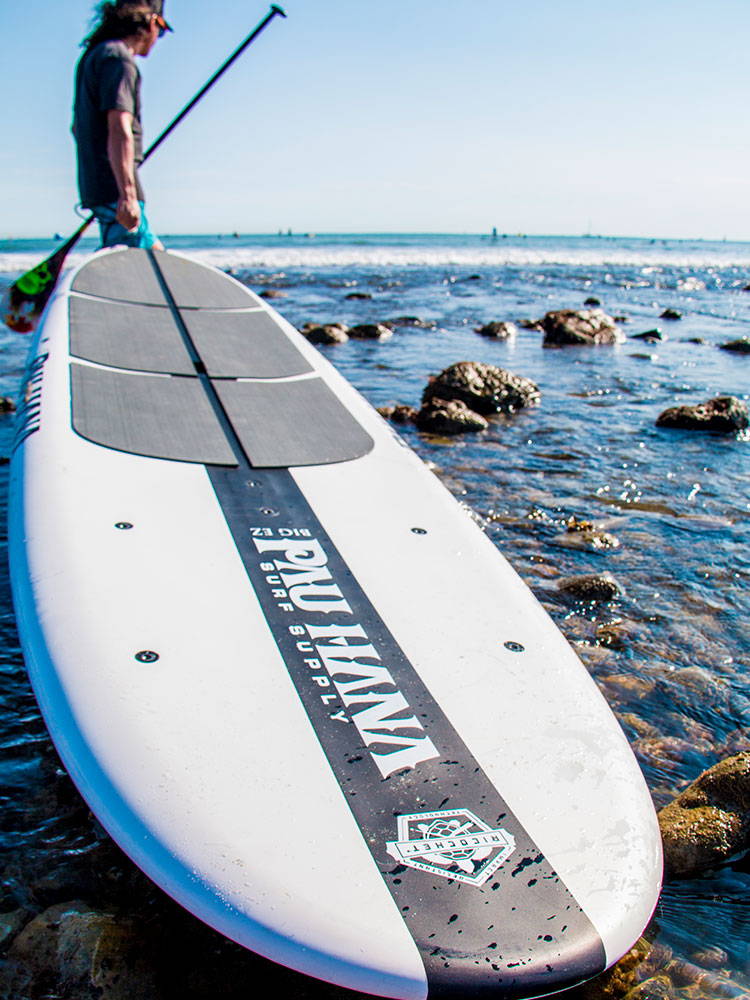 The development of Ricochet finally gave me a lightweight board that I could form into complex shapes capable of withstanding high impacts. Each iteration of this technology becomes more lightweight and tougher. Having new machines applying the material to the fiberglass allows more consistent and lighter weight application. We’re still developing ways and discovering how the Ricochet material interacts and affects the construction of boards.

We’re proud to say that Ricochet is ready to begin expanding into the rest of the Pau Hana boards. I hope that soon the need to be cautious of dings and breaks, even just dropping the board in the parking lot, will be a thing of the past. Even though the river is what spawned the Ricochet technology, now the Ricochet technology can give people peace of mind wherever they paddle and they can be confident with their purchase of this new innovative stand up paddle board. Keep your eyes open for more developments and new boards embedded with Ricochet for the 2017 year line up.

Head over to our YouTube channel to watch more from Pau Hana!